Victor is part of our Social Clubs programme and plays a key part (and is a firm favourite) at our Men’s Cooking fortnightly in Kilburn.

Known as the older neighbour to go to for cakes and bakes, chatting to him we soon discovered that he took up baking much later on in his life and he is a chef by trade; often cooking up a storm of Italian cuisine. 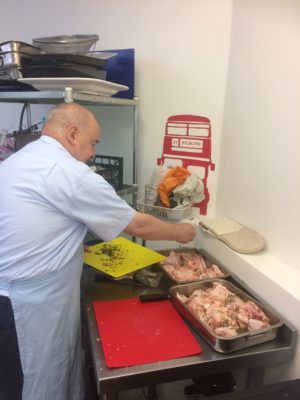 From Bolivia originally, he moved over to the UK 40 years ago and began his career as a chef in Italian restaurants. When asked to choose between pizza or pasta he immediately said:

“Choose pizza if you want something easy; spaghetti if you want to be healthy - unless there is sauce then it isn't that healthy!”

When he retired Victor wanted to learn more about baking and so he joined a baking community in London. To know even more, he began coming along to Men’s Cooking; two years down the line he certainly has learnt a great deal - it was only today we saw him pass over a rolling pin to his fellow neighbour (who was using a spoon) in order to crush the digestive biscuits up for the lemon cheesecake they were baking!

Victor loves cooking and doesn’t have a favourite thing to bake, although he does still favours cakes with lots of cream even though he can't eat them anymore! 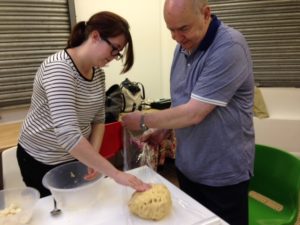 And when asked what it is he enjoys the most about Men's Cooking, he knew instantly:

“The people and learning to bake of course. You meet different people and there are some people here today who are new and it is nice.”

Feel inspired? This Great British Bake Off we are inviting you to take part in your own Bake Off or Bake Sale and donate the proceeds to North London Cares.