Tell us about yourself!

My name is Eva, I'm 29 years old and at the weekends I love to go climbing, hang out with my family and friends, enjoying a small drink at a pub, cooking and hanging out with older neighbours at social clubs! I work in HR and in October 2018 I ran the Royal Parks Half Marathon for North London Cares.

What inspired you to fundraise for North London Cares?

I attend the Social Clubs and I've seen how important it is for both the older and younger neighbours who come along. By attending you also see how much work goes into putting them, so I wanted to do more to help fund the activities as well as volunteering. 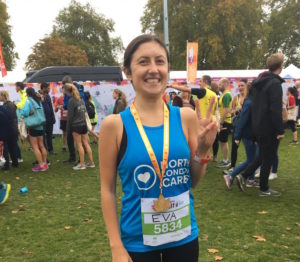 How did you prepare for the Royal Parks Half Marathon?

To fundraise, I emailed my current and former colleagues, my family, and contacted my friends on social media. I let them know about my experiences volunteering with North London Cares, and how their donation would make an impact.

And to train for the event, I ran 5 days a week (I had left it a bit too late to train as I would have liked, so it was a bit full on!)

I would run 3 or 4 miles on Tuesday, Thursday and Saturday, 6/7 miles on a Wednesday, and a long run on Sunday. I would run either before work or during my lunch break, so every time I went out I would remind my colleagues the reason why I was running to try to get some more donations!

What did you most looked forward to and most dread about taking on the run?

I had only run one half marathon before, and over the summer I had found that it was too hot so I hadn’t been running (and I was lazy), so I was really not looking forward to starting my training again.

However, once you get past the initial effort to start running, I actually really enjoyed my longer runs on Sunday, as it was great to clear my head before the work week ahead of me, and I got to explore parts of London I didn’t know that well

What the Royal Parks Half Marathon like on the day, and how you felt after you’d completed it?

It was cold and raining – which was not ideal! I was quite apprehensive, as I hadn’t done much running in the rain, so I wasn’t sure how that would affect me.

I was just overthinking things though, and I don’t think it had any negative effect, if anything it cooled me down!

The Royal Parks Half Marathon has a really nice route, where you go past various London sites. There is a great bit in Hyde Park where there are a ton of drums and people cheering you on, which really makes a difference to your energy levels.

I struggled in Hyde Park at around 10-12 miles, where I was starting to get tired and my willpower was going down, and although the park is beautiful, there aren’t as many sites to get distracted by.

The finish line, however, was amazing – the crowd was great and really pushed you in the final stretch! I had tried to do a sprint finish, but my family who were watching said I didn’t quite look like Mo Farrah...

I finished in 1 hour 45 minutes, which I was very proud of.

I also felt great that I had raised a good amount of money, and that I knew what a great charity the money would be going towards.

Any advice for anyone taking on a half marathon for North London Cares?

I would advise that people should train sooner than I had started!

Make sure to ask your family and friends to come along to cheer you on, as they really motivate you, plus you try to look good when you are running past them, which I think has a placebo effect that causes you to not feel so tired.

I would also recommend that you start fundraising as soon as you can. I found that talking about your personal experiences really makes a difference and encourages people to donate!