Most of us have had times when we’ve got stuck in a bit of a rut. The hectic pace of modern life can mean that we are always looking ahead, often not realising that we are letting the days go by in a blur of commuting, working and catching up on the latest series we are binging on Netflix. That’s why North London Cares social clubs are so important. Whether it’s dancing away your work stress on a Tuesday night, focussing on being mindful with your neighbours at a Saturday morning Yoga session or even joining in the quiz at pub club and high fiving a new friend with each right answer, that feeling of living in the moment is something that we all need to be reminded to do. 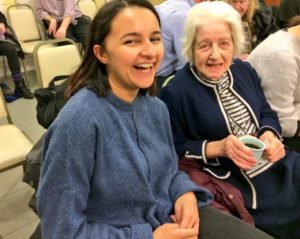 One person who seemingly never lets an opportunity for excitement to slip her by is older neighbour Elizabeth Ann. Anyone who has been to a few North London Cares clubs has had the joy of a conversation with Elizabeth Ann. From her tales of six week journeys across the atlantic ocean to see her Father when she was just six years old to running amock on a Warner brothers film set, there’s not a lot that this incredible 88 year old hasn’t done.

“There’s a gang of young boys who are always up to a bit of mischief in my street, pulling wheelies in front of cars and that sort of thing. I used to stop them and tell them not to do it but then I would always smile and explain why they shouldn’t. Then I would tell them a joke. They loved it and now they will shout out their windows for a new one when I walk past. Trouble is, I’m running out of material!” 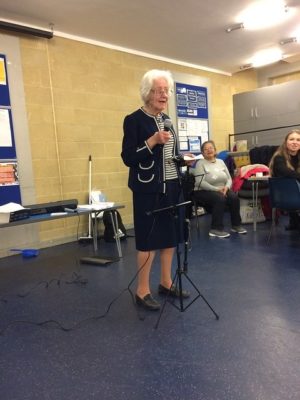 Elizabeth Ann has made full use of her catalogue of gags by performing her first stand up comedy gig at the age of 87 at the Kentish Town social club talent show.

“I was shaking with nerves!” she remembers “As soon as I told the first joke and people started laughing I began to relax a bit and enjoy it. I’ve been asked to do another gig but I used everything I had at the first one!”

From crossing the ocean to visit her Father at the age of six to cracking up an audience in her late eighties, Elizabeth Ann is never lacking for an anecdote. An accomplished journalist, she worked for several publications including a stint at the Observer in the mid sixties. Fifty years later Elizabeth Ann returned to the guardian offices but this time on a workplace visit with North London Cares.

“It was incredible to go into the guardian office such a long time after I’d worked for them. I was able to talk to some of the staff there now about the editors I worked under and even donated a piece of printing equipment I had to the archives.” 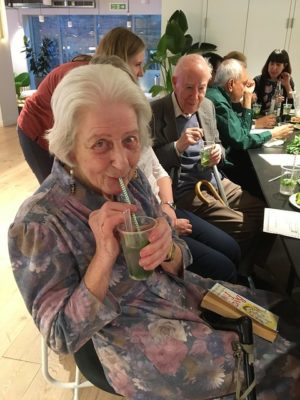 Just like the young boys who now hang on her every word Elizabeth Ann is no stranger to a bit of mischief. As a child with her younger brother she was able to get onto the Warner Brothers film studios early in the morning before production for that day had started.

“My brother and I used to sneak onto the set and move the papier mache mountains by an inch at a time. The continuity people used to come and check the level of the drinks or the length of cigarettes but forget about the bigger parts of the set. My friends and I used to squeal with joy when we watched the previews and could see the mountains jumping from shot to shot, it was a hoot!”

Elizabeth Ann has enough of these to fill about three books, the best way to hear the rest of them is to find her at a club, make her a black coffee with one sugar and ask her to tell you a story.

One thing’s for sure, an evening spent listening to ‘lady joke’ will be one you never forget!