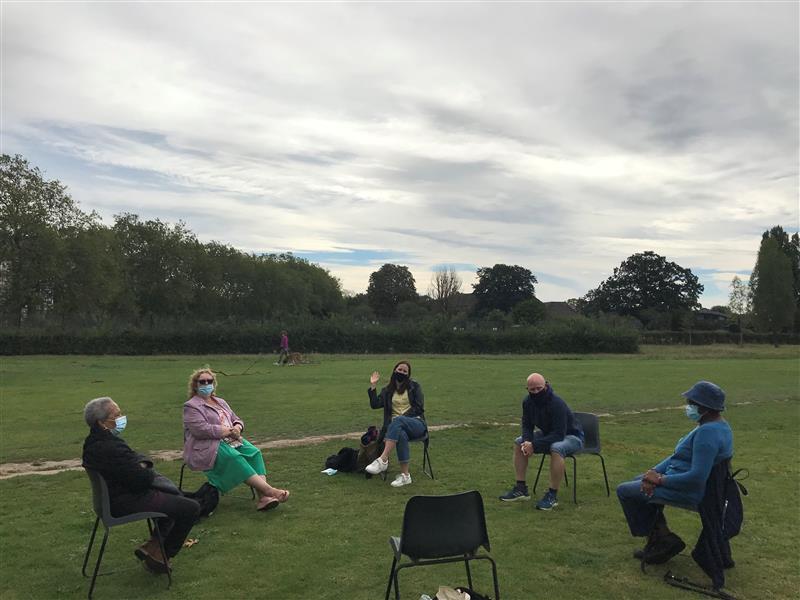 "I've enjoyed today - I'm learning how to speak again! I've been listening to the telly, watching umpteen repeats and going for walks around the block but there's been no-one to see. I even chatted to the birds I was that desperate. More of this, please." Kathy, 66.

Nearly six months after our last face-to face club, my North London Cares colleague Hannah and I made our way to Hampstead Heath to try out a socially-distanced, mini meet-up. Instead of a bag for life bulging with biscuits, fruit and tea bags, we were clutching hand sanitiser and face visors. And instead of throwing open the door of a community centre, we were out in the open on the Heath, ensuring that the club was safe for neighbours to attend during the ongoing pandemic.

Whilst on the surface the club felt pretty different, there was one constant that ensured that this was definitely a North London Cares event: our wonderful older neighbours. 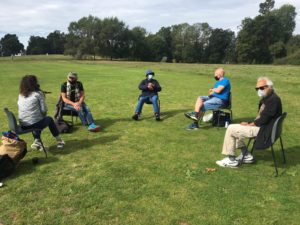 It goes without saying that the last few months haven't been easy for anyone. Our Virtual Social Clubs have been thriving and our phone-in events have gone from strength to strength. But a large proportion of the NLC family have been unable to join in with either.

John had travelled from Paddington for the first face-to-face club, a journey he would normally make at least once a week to attend the Kentish Town social club. A talented photographer, John is often to be found showing off his latest batch of incredible pictures to his friends at clubs. However, since March, due to not having a wifi connection and not being keen on chatting in a phone club, John has made do with regular check-in calls and his daily walks along the canal.

"I really enjoyed the face-to-face club, it was nice to actually see Andy after months of speaking to him on a phone. The thing I thought was good about how you did it was the organisation. We knew where it was happening, exactly how many people were going and most importantly, unless it rained absolute cats and dogs on the day, that the club would go ahead!" 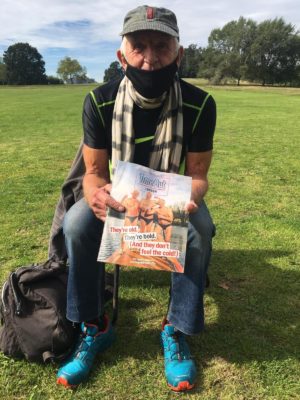 One of the best things about the face-to-face trials has been the moment the neighbours arrive and see pals they haven't been able to speak to for months. Once the laughs about lockdown hairstyles had been had, the conversation turned to how difficult and unnatural it's been to spend so much time in isolation.

Pat, who blew everyone away with her hula hooping at a club last year, was just glad that North London Cares was still on its feet.

"I've been lucky because I've got people I can call and people I can go and see from a distance but it's still not the same. The best thing about today has been seeing that everyone is ok and knowing that North London Cares is still going! I can't wait till we are all back together again. But I've so appreciated everything you are doing at the moment to try and keep us all connected." 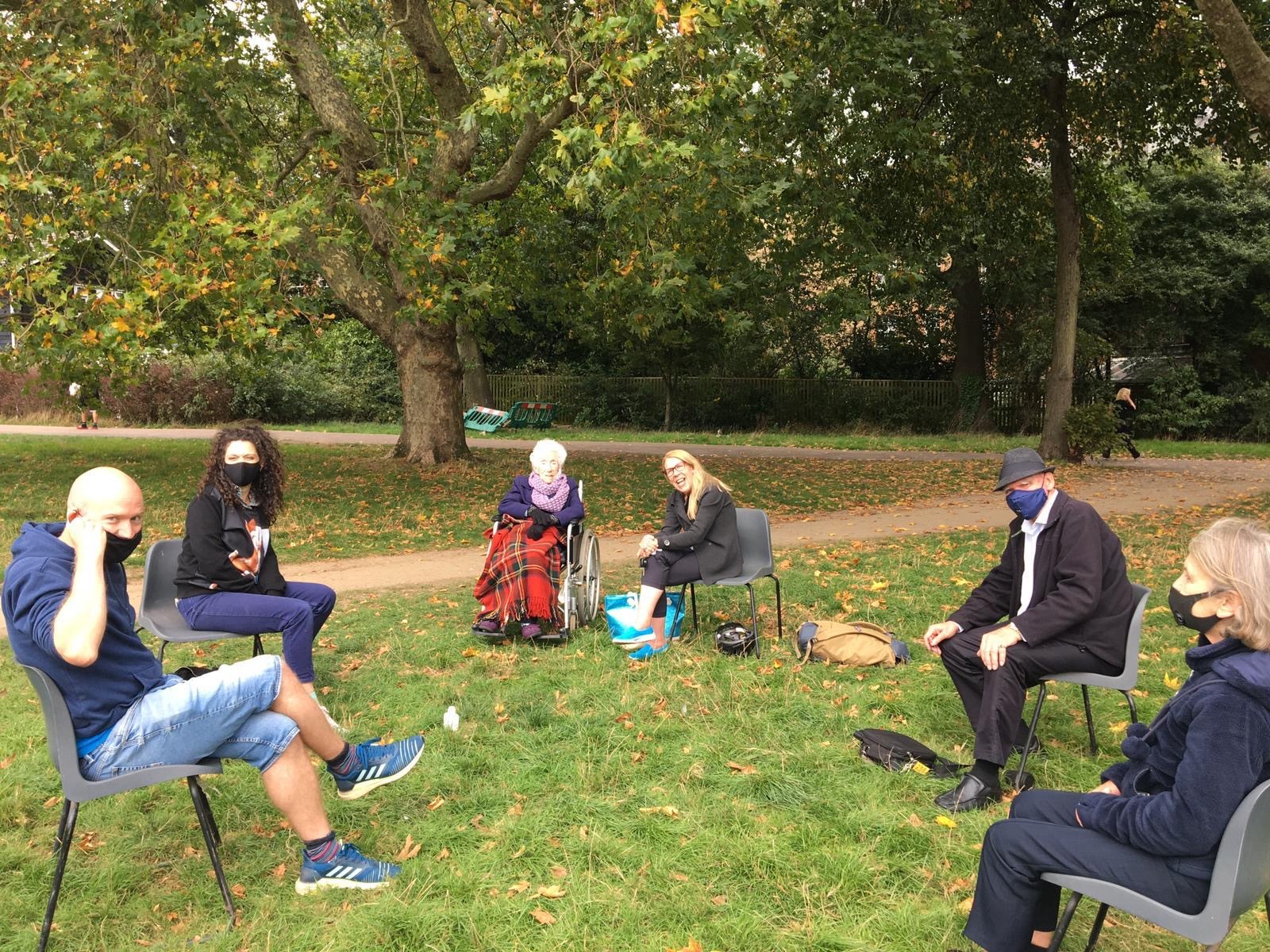 The masks couldn't hide the broad smiles that were creeping across all of our faces at the sheer joy of being together again. Whether it was Richard showing off his Time Out cover, John describing how he'd used the lockdown to perfect his photoshop skills or Elizabeth Ann regaling us all with her delight at finding a new favourite marmalade (Lime from Morrisons, check it out!) it was pretty much business as usual.

Clare and Pat had never met at a previous social club but wasted little time bonding over Pat's work as a tour guide, which had taken her around Clare's childhood haunts on the West coast of Ireland. Though they spent a lot of time laughing, Pat was also very reflective on just how difficult the last few months have been

"I really needed this today. I felt absolutely awful this morning and have done for a while. Things are very depressing at the moment and I wouldn't be surprised if I was a bit depressed. Just being outside and being able to speak to someone else today has lifted my mood completely." 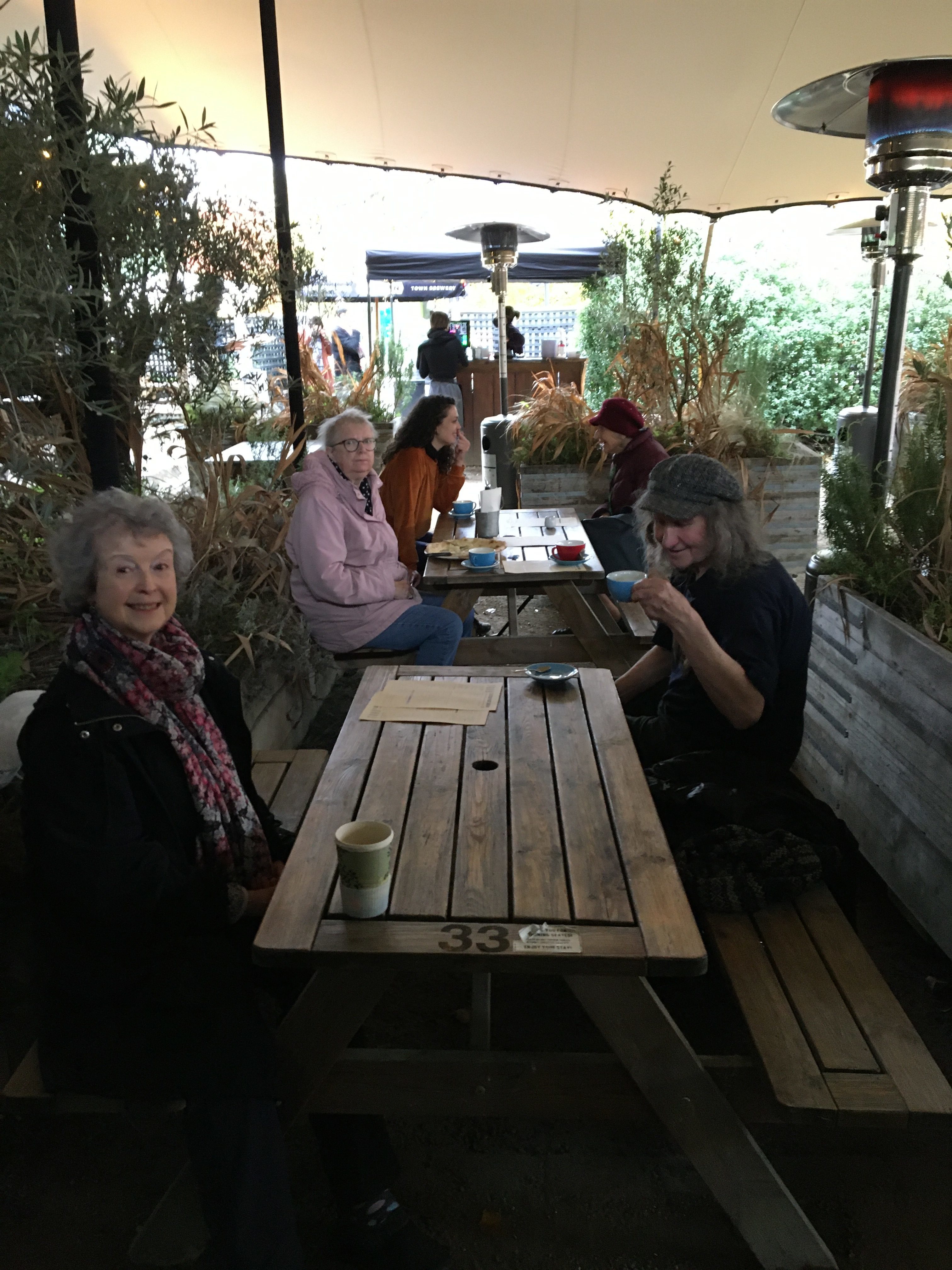 The decision to trial meeting face-to-face again was not one we took lightly and we put in place every precaution to ensure the safety of the neighbours. We prioritised those who haven't been able to attend any of our Zoom clubs. The hundreds of phone calls made by the team sadly highlighted how little interaction some of our neighbours have had.

We also took the difficult decision to make the face-to-face clubs for older neighbours only. Being restricted to just six people and with Hannah and myself present we wanted to maximise the number of older neighbours who could attend and so broke the mould of the usual North London Cares format. We know that our younger neighbours have also struggled during the last few months and going forward, Covid-19 permitting, we will be planning to organise face-to-face sessions that bridge generations again, just as our virtual clubs continue to do.

I will leave the last words to two people who have been part of the wonderful North London Cares family for a long time. Elizabeth Ann has lost none of her trademark sense of humour over the last few months, as seen in the video above!

And Kathy, who told us that she was so overwhelmed to be talking to people again, that she was struggling to remember to let other people speak. Kathy ends her video with two words that I think have summed up everyone's feelings about these initial trials "More please!"

With the second lockdown, with heavy hearts we've had to suspend our face-to-face clubs again, but they'll be back. And until then, let's all keep in touch.