I am a fundraiser and have the luxury of working for a large charity. Fundraising is a difficult business at the best of times; this challenge increases significantly when you have fewer staff and less funding. Consequently, when it comes to my own personal fundraising and challenge events, I tend to support small charities, as you know your efforts will be truly valued and that every pound you raise will make a big difference.

When I attended NLC’s induction event, I was genuinely inspired by the vast amount that such a small team achieve on a daily basis and the huge impact they have on our local community. It got me thinking - just a few weeks prior I had signed up for the Hackney Half Marathon. At this point I was running purely for fun (temporary insanity, I promise!). Then, on something of a whim, I dropped an e-mail to Emily stating that I was keen to run the Hackney Half for North London Cares. 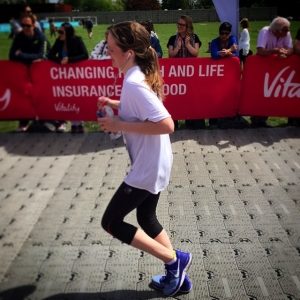 One of the first things you learn in fundraising is that the absolute worst that can happen is someone says no! Thankfully people responded positively and so far I have raised £695.00 for NLC. I think the majority of my friends and family are still in shock – in January last year I couldn’t even run a kilometre and now 16 months on I was running my second half marathon!

I was probably a little complacent this time around when it came to training and I didn’t do as many long training runs as I should have done. Still, I’d kept up a good general level of fitness since completing my first half marathon. Unfortunately, on the morning of the race I arrived at the event slightly late and consequently cut my warm-up short. If I can give you just one piece of advice, it is don't EVER skimp on your warm-up! I had an intense pain in my hip from mile 4, which spread down to my knee by mile 9 and resulted in me walking the majority of the final 2 miles. Whilst my time of 2 hours and 25 minutes was not even close to what I’d hoped for, I felt happy (and relieved!) to have finished and was delighted with the amount of money I managed to raise for NLC.

"One of the first things you learn in fundraising is that the absolute worst that can happen is someone says no!"

If you are contemplating running a half marathon, a 10k, a 5k or anything in between - just get out there and do it. Or at least sign up. If I can do it, so can you. You really, really can. Plus, there’s always the possibility that you may actually enjoy it. And if not, knowing that you have raised vital funds for a worthy cause should make it all worthwhile.

Inspired by Sophie's story? Got a challenge coming up that you would like to do in aid of North London Cares? Email Emily to find out more. Or, join our team doing the Thames Path Challenge in September

Posted by Emily Quilter on Monday 18th May 2015

Emily is the Director of Development for The Cares Family