Ammar was inspired to take on the Royal Parks Half Marathon after reading about North London Cares in The Guardian. However, on the lead up to race day, things didn't go as planned as injury prevented him from running. Despite this, Ammar kept going!

He continued his training and this spring, without any cheering crowds to spur him on, replicated the entire run solo! What an inspiration.

Below, he tells us about what inspired him to take on this challenge for North London Cares. 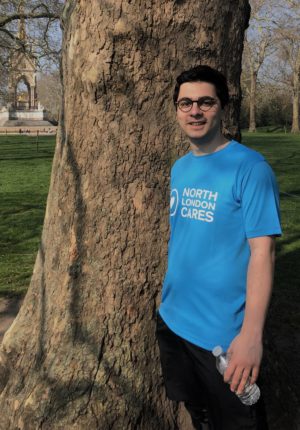 How did you find out about North London Cares?

I actually came across North London Cares through what I imagine is a more unusual means than many!

I’d been reading through the Guardian last year and stumbled across an article about the Obama Foundation Fellowship, which supports people that are working in their communities to bring about positive change. The article mentioned some of the work that the Cares Family and its founder, Alex, had been doing and I remember feeling really inspired that there was a community building roots and connections where I live. I think the message seemed to really resonate with me since I signed up to a volunteer induction soon after to learn more about it!

What inspired you to take on the challenge?

I think the main inspiration to take on the challenge was the Cares Family’s objectives, which seemed to really resonate with me. The community seems to do such a great job at bringing people together to hang out and have fun in a way that builds more roots and connections. Whilst it was a little tricky for me to take part in the Social Clubs and Love Your Neighbour programme, with travel commitments for my work, fundraising seemed like a really great way to help out. The Royal Parks Half Marathon was also really appealing as I’d heard about how fun the route was during a volunteer induction!

What was your journey to taking on the challenge?

My journey to taking on the challenge was admittedly slightly bumpier than I would have ideally hoped, having picked up knee tendonitis that I hadn’t managed to recover from in time for the Royal Parks Half Marathon.

Despite this, everyone at North London Cares was incredibly supportive.

I decided to run the same route in 2019 and, after a fair bit of physio and confirming with everyone that they were still willing to donate if I ran on a different date, I managed to complete the course independently!

Both the fundraising and training for the event were really great fun as I hosted a fundraising dinner party with a few friends and family that turned out to be a great way to both catch-up as well as contribute towards my fundraising target.

Having an incentive to get outside and go for runs was a great way of staying active and helped improve my wellbeing more generally. We also had a WhatsApp group for everyone in North London Cares participating in the challenge, where people were able to organise practice runs together.

How did you find running it?

The course for the Royal Parks were stunning!

As I was completing the route alone, I had an early start so that I could begin the course whilst the sun was rising and avoid some of the congestion and traffic. It starts near the Albert Memorial and getting to run past the Victoria Memorial, the Houses of Parliament and Kensington Palace was both amazing and a really great motivator.

By the time I got back to Hyde Park, the Household Cavalry Regiment was parading around some of the paths and I got some more motivation from spotting a few swimmers braving the cold water in the Serpentine Lido!

There were a few moments where I felt my knee beginning to go, so made sure to keep a more measured pace and not overdo anything, but by this point, the end was in sight, and it was a brilliant feeling to complete the course. After the challenge, I felt really proud to have helped raise funds for North London Cares.

Posted by Victoria Buckle on Wednesday 15th May 2019